Output of the program is as safe as possible and is by far one of the most secure encryption programs in the world. Only criteria during the development was maximum security.

Every single encryption or hashing algorithm was judged only based on it's quality with speed being irrelevant. Maximum emphasis was also placed on implementation and use of individual cryptographic functions and software as whole.

Only way to decode original content is by using correct password. Successful attack on two 4096 bit keys and 256 bit encrypted salt with using 6 respected symmetrical ciphers in safe cascade belongs to the realm of fantasy.

Program doesn't include any backdoors and design itself doesn't allow hiding them.

It's designed for absolute security of stored information. The first published version will also serve as reference to the future. It's prepared to decode and check future version of SafeNotes standard.

Whole logic of Safe Notes format is designed to be impenetrable even in future. It could be said that it's in its nature unique. It's completely documented and it can be assumed that excellent programmers will find reasons why it's been created the way it is.

Instead of an epilogue
Publishing of this program was initially not even planned. It is a result of two decades of step by step development of safe algorithms and a product which quality is hidden deep inside instead of outside visual look what in today’s world is not as much appreciated. My aim was to reveal the informations in such safe way, that the key to read them will appear later on. Initial idea was to create a simple reader without possibility of writing with it. At the end from my program used by many of my friends I have created this final version with complete description of algorithms.

Ciphers for encryption are AES, Blowfish, Twofish, IDEA, CAST6 and Serpent. They are used one after another in cascade with separate cipher keys and separate initialization vectors. This requires a "master" key with a 2240-bit length. SafeNotes uses three independent keys, one for head, one for salt and one for data encryption. This will increase the need for keys to 6720-bit. Much more than the most commonly used 128-bit or 256-bit keys. The NSA requires 128-bit keys for data marked SECRET, while it requires 256-bit keys for data marked TOP SECRET.

The cascade encryption is often represented as a matryoshka doll, but it is not accurate. You can not decode keys one by one, but only together as a whole. This is a very big difference, like when four 256-bit ciphers together have 258-bit instead of the 1024-bit security! 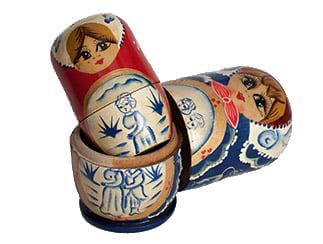